Lolly on "Tinder and Tribulations"

"My name is Lolly. I’m 21 years old, and I have Crohn’s Disease. Crohn’s Disease is an auto-immune disorder in which the body attacks tissues predominately (although not exclusively) in the bowel. I have spent 5 years dealing with this chronic condition. At the beginning of this year, I underwent life-changing surgery to form a Colostomy."

Like every bored 20-something year old, I shamelessly love to spend a rainy afternoon flicking through Tinder. As you can imagine, this has recently become a little bit more difficult for me. I chose not to put pictures of me with my colostomy up on my Tinder, out of fear of being judged and dismissed too quickly. But as I match and exchange a few opening messages, the inevitable question arises: “What’s your Insta?”

My heart sinks as I read this message, I was really enjoying the conversation, and now I feel forced to draw it to an end. I might post very openly about my colostomy on my Instagram, and I intend to continue to do so. But these photos are viewed by my friends as well as people who choose to follow me because they relate to my situation. Perhaps this person would follow my Instagram and think nothing of my colostomy bag. Perhaps they’d even think it was pretty cool that I was so open about it and realize it shows off a courageous side to my personality. But I’m just not sure I can take that risk and face the rejection if my next message goes unreplied to. I’m not sure I’m capable of being that vulnerable to a potential partner who hasn’t really gotten to know me yet.

This fear of rejection was rationalized similarly about a week ago as I made my way to Waterloo. Due to the weather, the trains were proving a nightmare. I eventually found myself a train supposedly making its way to London. No sooner had it pulled away before it was grounded to a halt due to a train at the next station without a driver. Frustrated, I glanced at the rather attractive stranger sitting across from me, and we shared a look of despair. He asked my name, and we very quickly fell into deep conversation, and before either of us knew it, we had been talking for almost an hour. He invited me to get off at Clapham with him and go for a drink. I politely declined as my friend was waiting for me at Waterloo, instead giving him my number and agreeing to go for a drink later in the week. When he got off the train a stop before me, I was feeling pretty chuffed with myself. How often do we all see an attractive stranger on the train, wistfully plan our imaginary lives together, and then depart having never given each other more than a faint smile? Swiftly, panic sunk in. I realized I had put my full name in his phone, and without a doubt, he would now be walking home and putting my name into Instagram – and why not? We all shamelessly love a stalk. I tried not to overthink it and carried on with my evening.

Unfortunately, that’s where the story ends - I never did get that text or go for that drink. I realize there could be a million reasons for this I couldn’t help but think it was more than likely because of my bag. He’d been so keen on the train and then changed his mind so quickly. But I guess I’ll never really know why. If I’m honest, this affected me far more than I’d like to admit. Objectively this guy was no 10/10, and in hindsight, the fact he picks girls up on the train was probably a bit of a red flag, but just to not hear a word really sucked. While I realize not everyone will be okay with my bag and I cannot expect people to be, this was my first experience of facing rejection based upon it, and it really got to me. 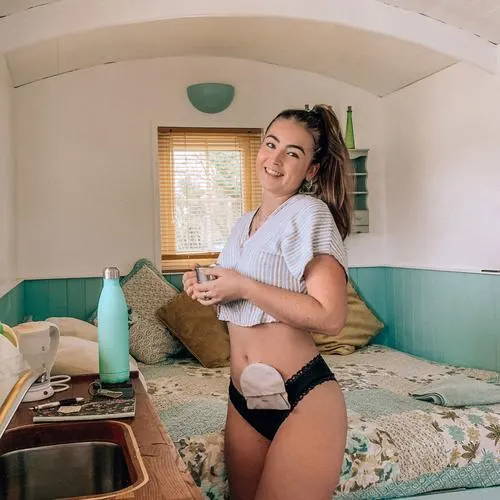 I think the reason it hit me so hard actually links back to my Tinder experience. On Tinder, it’s very easy to swipe past someone based purely on their physical appearance- whether that’s the fact that you’re not into blondes or are immediately turned off by the sight of a colostomy. In real life, you get a chance to evaluate the person behind the appearance, find things in common, make a connection before deciding whether to pursue them or not. I’ve always told myself that if someone took the time to get to know me a little bit and we really got on well, then they’d probably see past the bag. Unfortunately, in this instance, that wasn’t the case. We both loved to surf, shared funny stories from our travels, and agreed that South Western railways were a bag of shite. Still, if I’m correct on my hunch about him seeing my bag, then our immediate rapport wasn’t enough for him to consider still dropping me a message.

I spend a lot of time talking about embracing vulnerability. Still, this experience has reminded me that doing so is not a simple choice but a process. As we all grow as people, we learn to embrace our differences and flaws and who is worthy of sharing those vulnerabilities with and who isn’t. For now, I’ve ditched Tinder, but maybe eventually, I’ll ditch the insecurity. 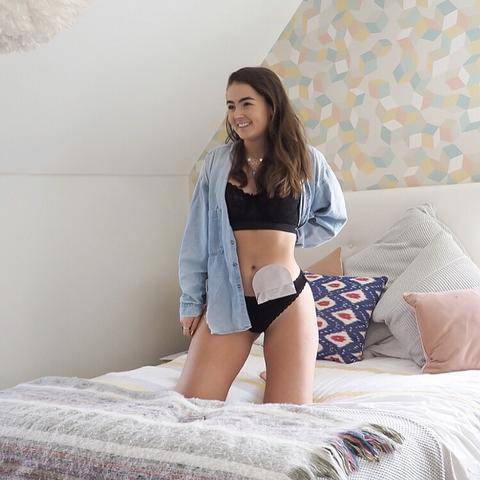 You can read more from Lolly on her blog, Trust Your Gut, and you can follow her on Instagram @lolly_cooper.